SORTIE-ND: How does it work?

SORTIE-ND is an individual-based, spatially-explicit model of forest dynamics that was created in the mid 90's by the team of Charles Canham at the Cary Institute of Ecosystems Studies (Millbrook, New York). It was initially developed to model forest regeneration after small disturbances (gap dynamics) in the transitional oak-northern hardwood forests of the northeastern US (Pacala et al, 1996). It was then modified by the team of Dr. Coates (British Columbia Forest Service) to include greater emphasis on forest management considerations, and they created a submodel that allowed different types of cutting and planting. SORTIE-ND has currently been parameterized and calibrated in several different types of forests including temperate forests of Eastern North America, boreal forests in Quebec and British Columbia, tropical forests in Puerto Rico and subalpine forests in the Spanish Pyrenees, among others.

SORTIE-ND is an individual-based model, and every tree has its own characteristics depending on the species and size. It is also spatially explicit, so it takes into account the position of each individual tree and its interaction with the environment to make the simulations. Forest dynamics results from the modelisation of the competitive interaction for resources among individuals. Hence, SORTIE-ND is especially suitable to model the dynamics of complex forests, such as uneven mixed-forests, where the response of every species can affect the response of the whole community. It allows for long-term simulations in which different management and climatic scenarios can be contemplated. 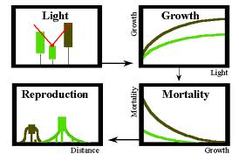 How does SORTIE work?

SORTIE-ND simulates the life cycle of every individual tree defined by user. Different processes, called behaviors, can act on a given tree. This behaviors usually correspond to demographic biological processes (growth, mortallity, regeneration) and can be parameterized separately for each species and life-stage (seedlings, saplings and adults), and the sum of individual responses of every trees to these behaviors will determine their performance and therefore forest dynamics.

Currently, the main processes we can find in SORTIE can be grouped in:

Even though they can not be considered as a behavior, allometric equations must be defined for each species, as they will determine the amount of light transmitted through forest canopy. Tree height and crown radius are a function of DBH. whereas crown depth is a function of tree height 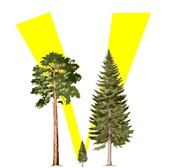 SORTIE-ND simulates the movement of the sun throuighout the growing season in order to determine the total, seasonally averaged light expressed as a percentage of full sun. For a given focal point, available light is determined by finding all neighboring trees that shade that point.  Each tree is defined by its location, DBH, crown geometry and crown openness.

Recuitment in SORTIE is determined as a combination of two processes: (i) Amount of seed produced by each tree and its dispersal pattern and (ii) the likelihood of germination of seeds on each substrate and the substrate availability. The former can be modeled as a function of seed size, following previous works by Green et al., whereas the latter must be obtained from experimental plots.
Con tecnología de